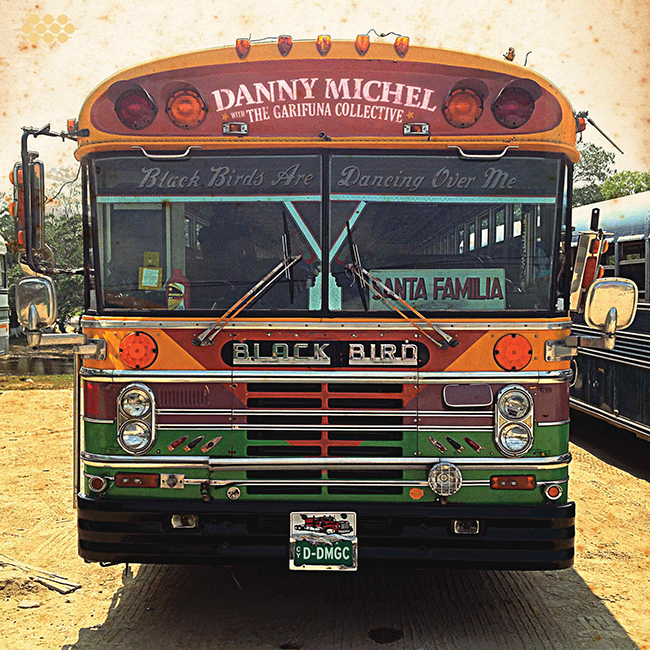 Danny Michel was born in Kitchener-Waterloo, Ontario, a small city one hour west of Toronto, and has earned a wide and devoted following across Canada. During his prolific career Michel’s style has ranged from power pop and alternative rock to singer-songwriter fare, leading him to be compared to everyone from Paul Simon to Elvis Costello. His albums have led to multiple Juno Award nominations (the Canadian equivalent of the GRAMMY) including one for “New Artist of the Year” in 2004.

A popular tourist destination, Belize is home to magnificent coral reefs, white sand beaches and clear blue ocean waters. Many visitors never stray from their comfortable resorts. But it was the people of Belize that made an impression on Danny Michel, so much so that he found himself returning to the country over a dozen times, even establishing a scholarship fund to help provide educational opportunities for local children. His visits led Michel to discover the soulful music of the Garifuna people, the unique Afro-Amerindian culture that resides in coastal communities in Belize, Honduras, Guatemala and Nicaragua.

As he traveled the country, Michel often heard the alluring rhythms of Garifuna music blaring out of taxicabs and village bars. Upbeat songs by the late Garifuna icon Andy Palacio and the lyrical wisdom of paranda legend Paul Nabor, among others, piqued Michel’s interest. But the veteran of Canada’s indie rock scene never imagined that he would one day seek out the originators of this enchanting music and blend his music with theirs.

As the years rolled on and Michel’s connection to Belize deepened, he decided in 2011 to reach out to Belizean producer Ivan Duran to explore the possibilities of working together. Duran, who runs the recording studio and record label Stonetree Records, is well known in world music circles for bringing Garifuna music to wider international audiences.

The mastermind behind Andy Palacio & The Garifuna Collective’s groundbreaking 2007 album Wátina, a deeply loved album that amazon.com anointed as “The Greatest World Music Album of All Time”, Duran was skeptical at first. The annals of international music history are dotted with artists such as Paul Simon, David Byrne, Peter Gabriel and others who have borrowed “exotic” flavors to spice up their sound, and Duran wasn’t looking to have Garifuna music become just an interesting ingredient in someone else’s musical stew. But Danny Michel’s long connection with Belize and the respectful way he approached the proposal led Duran to realize he had found a kindred musical spirit who shared his love for Garifuna music and the people of the region.

Danny Michel traveled the pot-holed roads by bus from the Caribbean coast to Benque Viejo, the inland town lying in the shadows of the Xunantunich Mayan ruins where Stonetree is based, with no guitar, no songs, and no expectations. Michel recalls, “I was terrified. I went down and walked into a room full of strangers who are all sitting there thinking who the hell is this guy. It was really intimidating. But it was absolutely incredible that I was welcomed with open arms.”

During the sessions, Michel bonded with some of the colorful characters who make up the loose-knit ensemble known as The Garifuna Collective : percussionist Joshua Arana, whose youthful spirit and easy smile camouflages a serious virtuoso of traditional Garifuna drumming ; laid-back and smoothly soulful guitarist Sam Harris who returned to Belize after a long stint in the US to enjoy the simple life as a Belizean farmer and occasional touring musician ; the vocal firebrand Desiree Diego, a woman who grew up deeply immersed in Garifuna traditions ; multi-instrumentalist Rolando Marcelino “Chi-Chi Man” Sosa Martinez, a musical legend from Honduras who wandered into the studio three days late in keeping with the relaxed attitude of the locals ; engineer and guitarist Al Ovando, whose constant smile and ebullient disposition buoyed everyone’s spirit. And let’s not forget the creative force that is Ivan Duran, a Belizean patriot of Catalan descent who makes musical diamonds appear out of the rough soil of Garifuna traditions.

During the weeks they recorded together an inseparable bond was formed, but it took a little while before the music started to gel. “I did have to win them over in a way,” recalls Michel, “Here I was some Canadian singer-songwriter whose music didn’t really make sense to them at first. The most important part of the song would be the lyrics, I mean my music is not really loud, you can’t dance to it, so what’s it good for, really ? I think they were skeptical but still into it for the adventure.”

Danny brought some songs, lyrics and arrangements, while The Garifuna Collective brought the powerful rhythms, melodies and instruments of their heritage. “To me, those Garifuna drums, the segunda and primero and the jawbone and the turtle shell, that’s the magic,” points out Michel.

An 8-song version of Black Birds Are Dancing Over Me was released in Canada by Six Shooter Records in the fall of 2012 and it immediately received tremendous accolades. Renowned critic and former editor of Billboard Larry LeBlanc called it “One of the finest musical works of our time. A career album.” Now Magazine exclaimed "It’s a fun and uplifting listen, bursting with acoustic and electric guitar, saxophones, organic, rich backup vocals and tons of Garifuna percussion. The obvious comparison is Paul Simon’s Graceland, but there are also moments of heavier Talking Heads-like funk." And Toronto weekly The Grid called the album “A blend of folky grit and tropical rhythms, nestled somewhere in between the rootsy vibes of Bedouin Soundclash and the slick funk of English singer-songwriter Charlie Winston. However you want to define the genre, this combination works.”

For the international release, Michel returned to Belize to record three new tracks, the funky “Behind the Waterfall,” the rousing anthem “Sad and Beautiful World” and the moving “This Is What Is,” which features the voice of Paul Nabor, the 83-year old Garifuna legend. These songs join “What Colour Are You ?” a catchy riff on perceptions and attitudes, the irresistible grooves of “The First Night” and the earthy beats of “Survivor’s Guilt” among other gems.

The release of Black Birds Are Dancing Over Me coincides with the launch of the new album Ayó by The Garifuna Collective, their first since front man Andy Palacio passed away suddenly in 2008. Fans of Danny Michel can discover the roots of his inspiration with this magical album whose songs of heartbreak, hope and joy will take your breath away.

This summer will see Danny Michel with The Garifuna Collective on an extensive tour in Canada and the US, with plans to bring the show to Europe in September. Michel is enthusiastic about the upcoming tour, “With everybody together on stage it’s going to be really exciting and there will be an infectious wonderful energy going on. The Collective will play a set of their music, then we can play my set, we can play together, we can play each other’s songs. It will be really fun and eclectic and a great experience for everyone, I’m sure.”
Vidéos
Télécharger
Liens