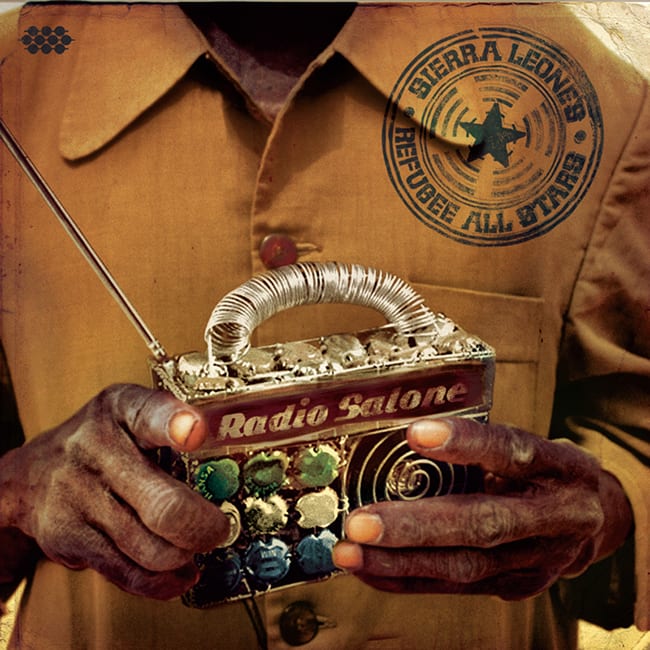 « Cette formation est véritablement symbolique de la musique de cette région d’Afrique où maringa traditionnel, reggae, afro-beat et fuzz rock se mêlent en arrière pensée… l’effet ‘sono-mondiale’ est aussi contagieux qu’efficacement produit. »Vibrations – Juin 2010
Biographie
Sierra Leone’s Refugee All Stars have risen like a phoenix out of the ashes of war and enflamed the passions of fans across the globe with their uplifting songs of hope, faith and joy. The band is a potent example of the redeeming power of music and the ability of the human spirit to persevere through unimaginable hardship and emerge with optimism intact. From their humble beginnings in West African refugee camps Sierra Leone’s Refugee All Stars have performed on some of the world’s most prestigious stages and matured into one of Africa’s top touring and recording bands.

Throughout the 1990s, the West African country of Sierra Leone was wracked with a bloody, horrifying war that forced millions to flee their homes. The musicians that would eventually form Sierra Leone’s Refugee All Stars are all originally from Freetown, and they were forced to leave the capital city at various times after violent rebel attacks. Most of those that left the country made their way into neighboring Guinea, some ending up in refugee camps and others struggling to fend for themselves in the capital city of Conakry.

Ruben Koroma and his wife Grace had left Sierra Leone in 1997 and found themselves in the Kalia refugee camp near the border with Sierra Leone. When it became clear they would not be heading back to their homeland anytime soon, they joined up with guitarist Francis John Langba (aka Franco), and bassist Idrissa Bangura (aka Mallam), other musicians in the camp whom they had known before the war, to entertain their fellow refugees. After a Canadian relief agency donated two beat up electric guitars, a single microphone and a meager sound system, Sierra Leone’s Refugee All Stars were born.

American filmmakers Zach Niles and Banker White encountered the band in the Sembakounya Camp, and were so inspired by their story they ended up following them for three years as they moved from camp to camp, bringing much needed joy to fellow refugees with their heartfelt performances. Eventually, the war in Sierra Leone came to an end, and over time the All Stars returned to Freetown, where they met other returning musicians who joined the band’s rotating membership. It was there in the tin-roofed shacks of Freetown’s ghettos that Sierra Leone’s Refugee All Stars recorded the tracks that ended up, along with unplugged recordings made in the refugee camps, being the basis for their debut album, Living Like a Refugee, which was released on the label Anti in 2006.

The resulting film that documented this moving saga, Sierra Leone’s Refugee All Stars, was a critical success, and introduced the world to the personalities and dramatic stories behind the band, not to mention their instantly appealing music. “As harrowing as these personal tales may be,” wrote The New York Times, “the music buoying them is uplifting.” Newsweek raved, “It’s as easy to fall in love with these guys as it was with the Buena Vista Social Club.”

The movie, album and eventual U.S. tours helped expand their following, and soon the band found itself playing in front of enraptured audiences of tens of thousands at New York’s Central Park SummerStage, Japan’s Fuji Rock Festival and the revered Bonnaroo Music & Arts Festival. They appeared on the Oprah Winfrey Show, contributed a song to the Blood Diamond film soundtrack, participated in the U2 tribute album In the Name of Love : Africa Celebrates U2, and earned praise and backing from Sir Paul McCartney, Keith Richards, Ice Cube, Angelina Jolie and others inspired by their life-affirming story and captivating music. In one of the most surreal moments of their climb to fame, Sierra Leone’s Refugee All Stars opened for Aerosmith at the 12,000-capacity Mohegan Sun Arena in Uncasville, Connecticut.

The senseless deaths and illnesses of friends and family, including some of the band’s original members, and the slimming hope for great change in their country as a result of peace, has only strengthened the resolve of Sierra Leone’s Refugee All Stars to do what they can to turn their country around. Their weapon in this struggle is music, and their message, while offering critique and condemnation of wrongdoing, remains positive and hopeful. Optimism in the face of obstacles, and the eternal hope for a better future motivates their lives and music.

“It’s been a long struggle out of the war, out of miserable conditions,” notes Koroma, “We try to bring out sensitive issues that are affecting the world. It is all of our responsibility that the masses are suffering. We bring our positive messages into the world so we can expect a positive change in the world. And, most importantly, bring about peace.”

For their second album, the members of the All Stars knew that they needed to prove to the world that they had the talent to produce an album that would rise above their unique story and stand on its own musical merits. After recording some songs and demos in Sierra Leone, the group went to New Orleans, Louisiana to work on the album with veteran producer Steve Berlin, a member of Los Lobos who has produced for Angélique Kidjo, Michelle Shocked, Jackie Green, Alex Ounsworth, Ozomatli, Rickie Lee Jones and many others. Rise & Shine brought the band new accolades and earned 2010 Album of the Year on the prestigious World Music Charts Europe.

The group continued to tour to rapturous crowds, opening for the massive rock/reggae band Dispatch in front of a sold-out audience at Colorado’s legendary Red Rocks Amphitheater in June 2011. The All Stars enjoyed an enviable residency on the Jam Cruise, a floating music festival on a Caribbean Cruise ship that also featured Bob Wier, Robert Randolph, Galactic and Maceo Parker. In addition, the band collaborated with a number of artists in 2011, recording the song “Iñez” with singer-songwriter Chris Velan, joining children’s music superstar Dan Zanes on the song “Little Nut Tree” and appearing on the Playing for Change version of “Gimme Shelter.”

In January 2011, the All Stars returned to the studio, this time in snow-covered Brooklyn, NY. Their producer for their third studio album was producer and keyboardist Victor Axelrod, aka Ticklah, who has worked with Amy Winehouse, Sharon Jones & the Dap Kings, Antibalas, The Easy Star All Stars and many others. A master of dub, roots reggae, classic soul, Afrobeat and more, Axelrod added a whole new dimension to the All Stars sound and helped them reveal how years of touring have honed their skills.

The All Stars took advantage of the vintage analog gear at Daptone affiliate Dunham Studios to record an album inspired by the retro sounds they heard blasting out of radios in their younger years. Old school reggae, funky African grooves and deep tribal chants form the musical underpinning of Radio Salone, which is scheduled for worldwide release on April 24,2012.

The album title references “Salone” – meaning “Sierra Leone” in the native language of Krio – in which the band sings (along with five other languages) on the new album. The radio theme appears throughout the album artwork and reflects the impact that radio has long had on the band. In the pre-TV and Internet days, radio served as a connection to the rest of Africa and the globe. Long before the war, members of the band were exposed to vintage reggae, Congolese soukouss, American soul, and much more. During the war, radio provided an essential escape from the harsh reality of the refugee camps, bringing news and music to people desperate for a link to the world beyond the camps.

Radio Salone represents a new musical high point for the group, and demonstrates once and for all that Sierra Leone’s Refugee All Stars are one of the best bands in Africa and the world. With an active year of touring planned the All Stars look forward to building their global audience and bringing their message of hope and celebration to longtime fans and new audiences everywhere.
Vidéos
Télécharger
Liens