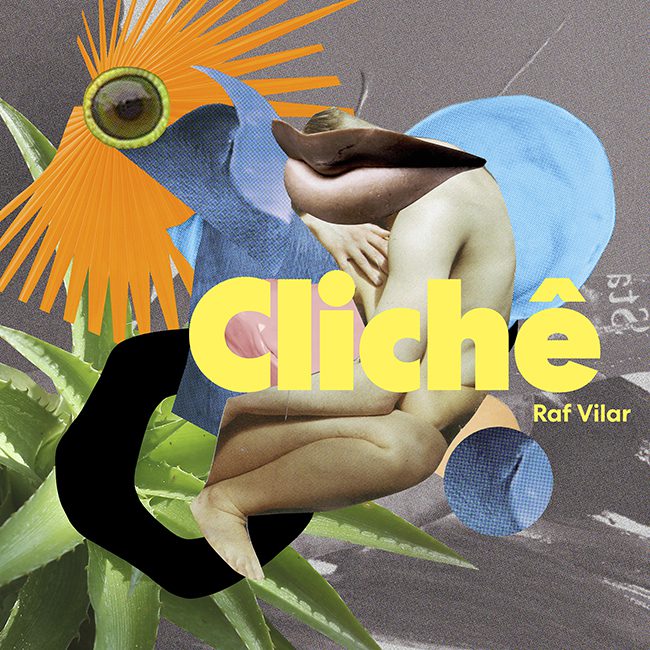 Clichê
Label: Ajabu!
Ajabu is delighted to announce the release of « Sou Tropical » by Raf Vilar, an exciting Tropicália/Bossa Nova-inspired song that is the first single of his upcoming album « Clichê », to be released globally on March 4, 2022. Soft vocals combined with classic Brazilian percussion and lead bass give this song a nostalgic early 70s sound.

Raf is originally from one of the favelas of Rio de Janeiro but has been active in the European music scene for more than fifteen years where he built an international network of renowned musicians, some of whom are featuring on his new album such as bassist Ben Reed (Frank Ocean, David Byrne), Alex Rose (Minus the Bear), Tuca Milan (Let Drum Beat) and Phil Stevenson (Foufoulah).

« Sou Tropical » is mastered by legendary multi-Grammy winner Felipe Tichauer in Miami and is a mix of different Brazilian sounds and traditions with folk and pop influences.
Présentation
1 - When and where was this album recorded? Whas it different to previous methods or locations due to lockdown etc?

I had the idea for the album before the pandemic, but it would be impossible to say that the pandemic has not affected my music. During the pandemic, I witnessed and experienced that whilst people never felt so lonely, we also had an unprecedented shared experience. When our realities were shifting, things that we had previously thought of as boring or repetitive, were suddenly thrown into new lights. I became fascinated with re-examining cliches which were suddenly both new and old. This duality of the pandemic found its way into the album. The album is a balance of celebrating the creative idea and marrying it with the practical implications of recording. It was an unexpected journey. The album was recorded between London and Brighton and I wrote most of it in Brazil and Portugal. The pandemic forced us to face our limitations and I didn't let this stop me. There were a lot of email exchanges, WhatsApp messages and telephone calls - one of the musicians has no mobile phone or social channels and making sure we're all communicating well also became a challenge this time. I went to Brighton a few times to record vocals and everytime we were in the studio, we had to make sure we were all tested. We had to go with a much more organic approach to sound creation this time as we had to make do with what we had around us. Compromises were made, but sometimes that can make things more beautiful and memorable.

2 - What meaning does this album have to you

This album is built on the duality of  the loneliness of the pandemic and togetherness of facing this horrific reality. The meaning is survival, it's returning to those things that nourish us, those things that provide strength to carry, bringing old memories, things that used to make us happy that we need to bring back right now. I had a lot of time to think about my childhood, the sounds of the parrots of Rio, the feeling of the heat in Ipanema, the smell of the forest in Tijuca. Some of these things are cliches which in other times we might have brushed over, but the pandemic allowed for new appreciations. All of these examples are in the album. My origin and my story were the slums of Rio. Things I wanted to connect back to. The intergenerational trauma of growing up in the slums gives many of its survivors a sense of victory and success when they make out. However, the trauma can not resolve until we face the sadness of economic injustice. Music is an opportunity to reveal that sadness. My bossa has always had this sadness. It's only now that I've come to understand it better. The pandemic was a type of reflection. A mix of political, medical, economical and uncertainty. We had to look for our inner truth. I'm hoping the album will resonate with those that explored this journey during the pandemic and that they'll recognise the sadness, but also the strength and the victory.

3 - Tell us how this project came to be and how you all feature in one another's lives?

I wanted to write something that reminds me of Rio de Janeiro during my youth in the 80s and 90s. The sounds, the smells, the colours. People have an image of Rio that can be a cliche. This was an opportunity to re-examine that cliche to see what we can find. Practically, the key people involved in the album are my friends and friends of friends. Tuca and I go way back. We are both from Brazil and when we arrived in London we played together from small bars to big venues. I love her sound and she has stuck around for all these years, so she must see something in my music too. I was very lucky to get Tuca's time during the pandemic as she has been involved in a much bigger project involving ABBA. It seems the world can't get enough of Brazilian rhythms. The others are also very dear to me, but I provide more of their background in question 6 :).

4 - Was there an aim or mission statement for the band and the album? anything you specifically wanted it to be, or even not to be?

I wanted no rules! Sometimes a musician might think that something sounds a bit weird, but for me it's a masterpiece! I love weird sounds and unusual rhymes, as long as it intrigues me. Some of my lyrics intrigued the musicians and I love when they do the same back to me.

5 - If a stranger asks you that inevitable question, 'oh what does your band sound like?'. How do you respond?

I love that the new generation of artists are creating their new genres and I think it was time for me to create my own. Usually I say that it's "bossa". There are two types of bossa nova, one is the one we hear in the US, more jazz than samba. The other bossa nova is the "roots" one, the original one from Rio, more samba than jazz. Outside the UK and US, everything is labeled as "world music", but it's a niche and sometimes it's hard to explain what that means. I love being part of the "world music" genre, but in other countries they label my music differently like latin, easy listening, folk...  In Brazil some people say it's MPB - popular Brazilian Music, but a lot of people hear many other influences and prefer to call it pop, tropicália or indie. So, when someone asks what I sound like I have to go through all the above.

6 - Who performed on these tracks and what kind of instruments were mainly used?

The first person I invited to record was the percussionist (and my close friend) Tuca Milan, percussionist. Tuca and I have been playing together for years, from small bars to big venues. Tuca adds a lot of soul in my songs. She plays all the Brazilian and African percussion beautifully and I love that in the album we tried together not so common instruments such as goat nails and flexitone. I also invited Ben Reed to play the bass in a couple of songs and he ended up playing in almost all of them, including guitar. I'm a huge fan of Ben and knew his job from Frank Ocean and David Byrn albums. I  never thought that one day we would be working together! I met Phil Steverson in the London music scene. Phil is an amazing guitarist and we had some amazing gigs together! I mixed my album with Alex Rose who also played sax on a track and keyboard. I met him in London at the end of his sold out tour with his band Minus the Bear. Alex has been touring around the world for years and decided to settle down in the UK. I wanted to bring someone that wasn't used to working with jazz or Brazilian music to bring something else to the album. I invited Alex after we had a chat about pop music and when he used to produce Ellie Goulding. The last person to join the album was Felipe Tichauer, a multi grammy winner that was recommended to me by a friend. Felipe is based in Miami and he's one of those crazy busy producers/mastering engineers and I can't believe he managed to find time to work on my album!

7 - What's the songwriting process between you all? Is it structured/improvised etc

It's a lonely process, a bit self therapeutic, just me and my guitar. Definitely more on the improvised side rather than the structured side. Some artists are able to write a song per day, but I take my time. I have hundreds of songs and in the end the hardest part of the process is picking the right ones to be recorded. The structure comes at the end, in the editing, the shaping and the selection. All with a respect for the improvised.

8 - How would you describe the vibe of recording this? paint us a picture of being in the studio.

A lot of laughs, teas and biscuits! We never start on time because we love gossiping about life, sharing old brazilian albums and talking about new favorite brazilian artist... When we start recording, I prefer to play the base of the song first with my voice and my guitar just to give everyone the structure of the song. After I record my part, we start adding the instruments one by one. Once we recorded all instruments, I remove my guitar and add new vocals. Usually in studios we're surrounded by instruments and suddenly we start playing everything we have around. I also like recording live in the studio, all musicians at the same time - it's much more fun!

9 - What do you hope listeners will get out of this - either from a particular track or the release as a whole?

I hope listeners will get a glimpse of the soundscape of the real Brazil, the colours, the rhythms, the sounds, the cliches, but also an appreciation of how important those things are in difficult times. It may take longer for listeners to visit my country, but this album can give them a sense of what to expect. I hope they will hear loneliness, tribalness, ritual, celebration, sadness, angst, release, drama and peace.

10 - Was there a piece of music / art that particularly inspired the album?

I'm very influenced by Brazilian cinema. Every time I write a song that I really like, I watch a Brazilian filme called Limite, from 1931. I love singing while watching this film and imagine if one of my songs would fit in one of the scenes. Glauber Rocha's Terra em Transe was released in 1964, but still influences many artists of my generation. New films like Bacurau have also influenced me, especially my song Sou Tropical.

Music wise, I was very inspired by the artists from Tropicália when I wrote my new album. Caetano Veloso's album Transa was a huge inspiration. The album was also recorded in London during the Brazilian military dictatorship and it's a masterpiece. Of the new generation of Brazilian music, I was listening a lot to Céu while recording the album and I'm sure she had a big influence on it.