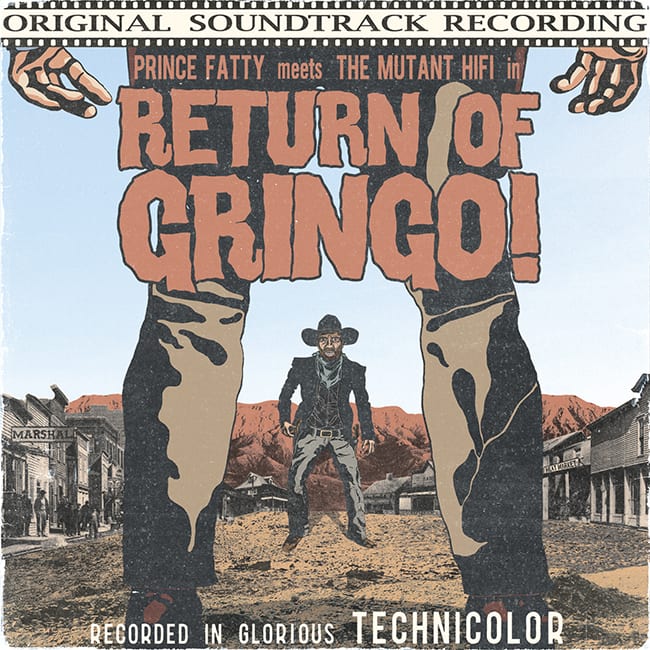 Return Of The Gringo
Label : Mr Bongo
Prince Fatty meets The Mutant Hifi in ’Return of Gringo !’ is the fevered and frontal lobe-damaged brainchild of Nick Coplowe (The Mutant Hifi) and Mike Pelanconi (Prince Fatty), the result of years of plotting, planning, laughing and procrastinating.

1. Transistor Cowboy2. Black Powder3. Plague Of Locusts4. Wear The Black Hat (If The Black Hat Fits)5. Way Back To Town 6. Across The Border 7. Up The Creek8. Moscow Mule9. Son Of A Thousand Fathers 10. The Good, The Vlad And The Ugly11. Blondes Have More Guns 12. Hava Nagila
Biographie
Prince Fatty meets The Mutant Hifi in ’Return of Gringo !’ is the fevered and frontal lobe-damaged brainchild of Nick Coplowe (The Mutant Hifi) and Mike Pelanconi (Prince Fatty), the result of years of plotting, planning, laughing and procrastinating. Put simply,it is a surf/ska/spaghetti western soundtrack album for a film that is yet to be made. Think Dick Dale jamming with the Skatalites with Morri- cone at the helm, including appearances from Alessandro Alessandroni (the original spaghetti western whistler) and you’re in the right section at the record store, although it is possibly a very small section !
As Steve Barker (on the wire) said about a previous Mutant Hifi release ’it’s refreshing to hear a record which fits so badly into any genre’........

It’s a quick draw shootout in a mexican standoff, pitting hard hitting ska against ripping surf riffs and outlaw ban- dito brass, the cold anarchic freedom of the wild west seen through a lomographic lens where the hot sun and scorch- ing sand make sure that only the toughest survive, leaving their enemies to the flies, the prairie dogs and the vultures. It is the son of a thousand fathers, every one of them a bastard. Every gun sings it’s own tune.
There are two kinds of people in this world.........

Mike ’Prince Fatty’ Pelanconi is well known for his produc- tions over many years, from Acid Jazz to Lilly Allen via the Pharcyde, Graham Coxon, as well as his own Prince Fatty recordings and most recently Hollie Cook and, with the Mutant Hifi, the Battle For Seattle Nirvana/Reggae mash up featuring Little Roy. A staunch defender of live analog music production, his keen nose sniffs out the best grooves and cooks them to perfection with a sound that has just the perfect blend of retro flavours and fresh spices.

Nick ’Mutant Hifi’ Coplowe is known for his work for many years for the On-U Sound label, producing the likes of Asian Dub Foundation, Dub Syndicate, African Head Charge, Mark Stewart and Little Axe, in his guise as Adrian Sherwood’s right hand man. A long time love of instru- mental surf music, as well as russian and jewish folk melo- dies shape his musical world along with his love of ska, dub and reggae. He is a musical pervert, and proud of it.
No horses were spared in the making of this motion picture soundtrack.
Vidéos
Liens