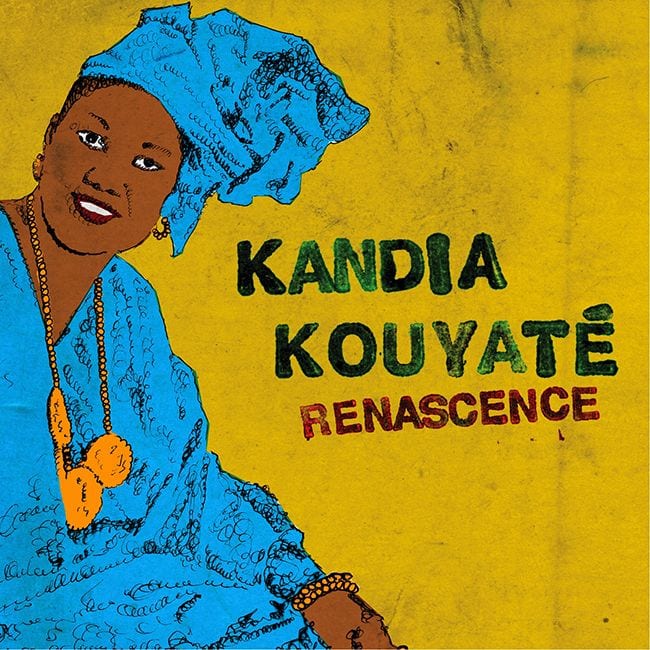 Born and raised in Kita, an ancient city in south-western Mali, Kandia was recognised as a talented singer from an early age, and she began performing professionally in Bamako while still a teenager. As her reputation spread around West Africa, her rewards for public and private appearances mounted, and while some wealthy patrons gave their favourite singers new cars, one of Kandia’s placed a light aircraft at her exclusive disposal. With that kind of success, she saw no reason to make records. But among her most ardent fans was record producer Ibrahima Sylla, who implored her to give him the opportunity to make an album with her. She resisted, he persisted, and nine years later Kita Kan (Sterns 1999) was released to international acclaim. It was followed by the beautiful Biriko (Sterns 2002).

In 2004 Kandia Kouyaté suffered a stroke. Her recovery was slow and difficult, and for seven years she hardly spoke and did not sing at all. Even after regaining her strength she considered herself retired. By that time Ibrahima Sylla was in failing health, but he had not lost his ardour for her voice or his awe of her aura, and in 2011 he visited her home in Bamako and convinced her to return to the recording studio. Lamentably, he did not live to complete the album. He died in 2013, and François Bréant, who had worked with him on such recording landmarks as Salif Keita’s Soro (Sterns 1987) and Thione Seck’s Orientation (Sterns 2005), together with Sylla’s daughter Binetou, finished the project.

“This new album was made only because of Sylla,” says Kandia. “I had been ill and Sylla was gravely ill, but he was always there [in the studio], encouraging me. He asked me to sing everything I knew, everything that that was in my head. I said ’I know nothing. I’ve forgotten everything.’ But he insisted. ’Tomorrow it will come back,’ he said.”
And it did. Her voice, darker and richer than when it first carried her to fame more than 30 years ago, has an authority that arises from a very deep well and cannot be faked. It is the voice of a true ngara. And Renascence is her resounding declaration of personal and artistic rebirth.