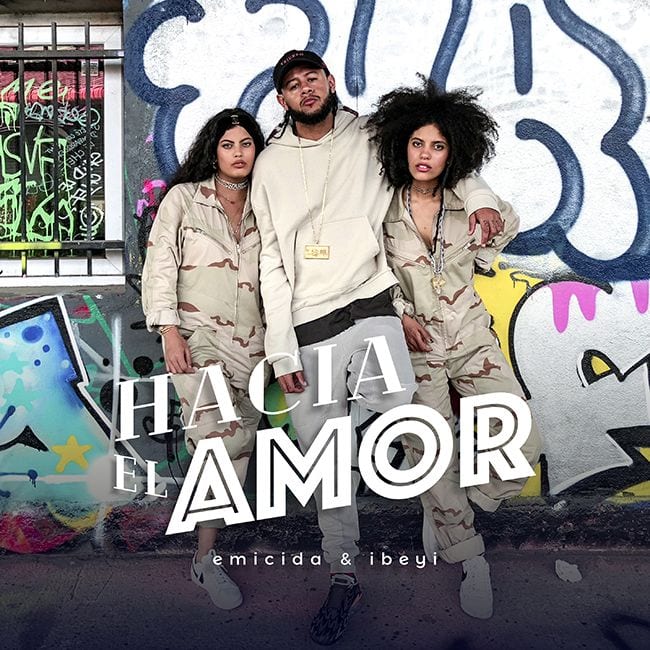 Singing in English and Portuguese plus with Emicida rhyming for the first time in Spanish, the song reveals a lesson of African tradition, promoting a trip to the spiritual world, Orum, visiting the orixás deities, from Xango to Exú. “​Invisible​ ​a los problemas, mi poemas son el puente. Libre, cuerpo, mente​”​. Produced by Márcio Arantes and co-written by Emicida, Ibeyi, Márcio and the twins mother Maya Dagnino, “​Hacia El Amor​” unites the signature sound of both artists using African ancestral drums mixed with modern electronic beats topped with lyrics of love and equality. Arantes explains, "​I identified something in common between Ibeyi and Emicida, that became the backbone of the music. It was through black ancestry that this happened : we used a rhythmic pattern that exists in both the Brazilian candomblé and the Cuban santeria (country of origin of the girls) and it was this element that not only the whole arrangement was created but also what inspired the entire song, seeing the common thread between all of us.​"

The desire of a collaboration came when ​Ibeyi ​were introduced to Emicida’s work by a Brazilian friend. Lisa-Kaindé explains, “​Sometimes you meet an artist and you don’t know how or why, but they instantly become a part of your creative family​.” ​Naomi​, who is known for incorporating hip hop elements and beats into Ibeyi’s music, explains further : "​We love hip-hop so I’ve always wanted to work with rappers and when we heard Emicida’s music we knew he’d be a great collaborator for Ibeyi.​”

For ​Emicida finding collaborators from other corners of the globe has naturally been a part of his journey. He recorded the hit "Oásis" alongside the North American singer Miguel, "Olha pro Céu" with the Japanese of the Tokyo Ska Paradise Orchestra, "Bonjour" with the French partner Fefe and "Cholonización", with the Ecuadorian Guanaco. On working specifically with Ibeyi he explains, "I’m glad we were able to create a sound with such passion that speaks so strongly to our time. I’m a fan of them (Ibeyi), I’ve been following them for a number of years since the first album, I feel something very important in them, like great Brazilian artists such as Clementina de Jesus, Geraldo Filme and Tia Doca, people who saw in music an opportunity to share their roots with pride.”

Recorded at LAB Studio on January 30th and 31st, 2018 in São Paulo, the single "​Hacia El Amor​" by Emicida and Ibeyi has global distribution by Lab Fantasma and Sterns Music
Brasil and will be available on all platforms June 8.

Ibeyi ​is 23-year-old French-Cuban twins Lisa-Kaindé and Naomi Díaz. Since the release of their critically-acclaimed, self-titled debut album in February 2015 and their sophomore album ​Ash​ in September 2017 on XL Recordings,​ Ibeyi​ have been captivating audiences across the globe with their unique blend of contemporary electronic music with pop, hip hop and Afro-Latin rhythms, influenced with the traditional sounds of ​Yorùbá. Ibeyi’s sound has been impacted by their late father Miguel “Anga” Díaz, former member of the legendary Cuban group Buena Vista Social Club. Their name Ibeyi comes from the Yoruba language and means “twins.” In 2016 Ibeyi made an appearance in ​Beyoncé’s​ video for ​Lemonade​.

From the north of São Paulo, Emicida started to stand out in 2006 in freestyle battles and, in 2009, he released the mixtape “Pra Quem Já Mordeu um Cachorro por Comida Até que Eu Cheguei Longe”. The work marked the debut of the company he founded with his brother, Lab Fantasma, as a musical label. He continued to release two mixtapes and two EPs, until his first album, “O Glorioso Retorno de Quem Nunca Esteve Aqui” (2013), considered album of the year by the brazilian version of Rolling Stone magazine. In 2015 came “Sobre Crianças, Quadris, Pesadelos e Lições de Casa”, inspired by a trip through Angola and Cape Verde, and in 2017 recorded his first DVD, 10 Anos de Triunfo, released in May 2018.