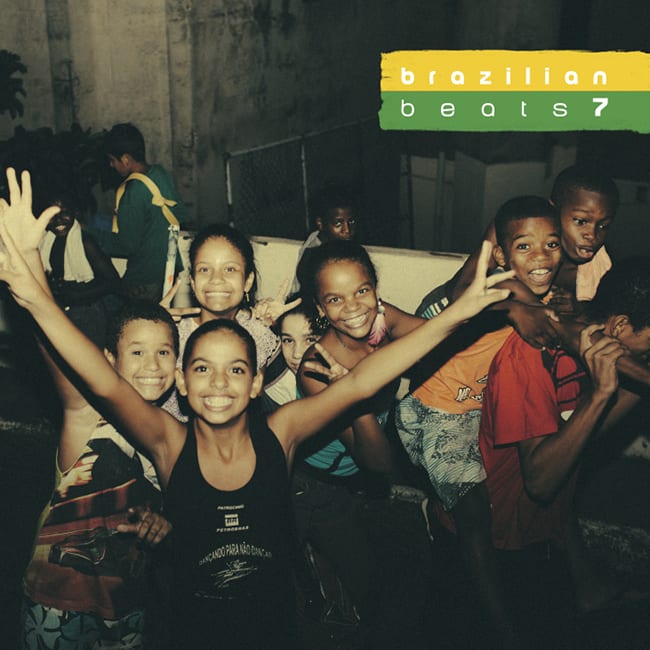 Vol.7
Label : Mr Bongo
The Brazilian Beats series is back with a mixture of classics, current Bongo favourites and unreleased gems.

I first heard of Karol Conka from my old pal Marcelo D2. He had done a few shows with her and I kept in touch with her producer, Nave, who is a real talent. We were looking for a new Brazilian artist who could connect to gringos with a modern style and diverse musical palate, a kind of Brazilian Azelaia Banks/ MIA crossover. Nave’s production is so contemporary : he was mixing trap, baile, dub and hip hop while also creating a new sound by sampling a lot of Brazilian North Eastern folk groups, which reminded me of the Tropicalia movement. ‘Boa Noite’ was Karol’s first track to showcase this sound and later this year we will release her full debut album. Hailing from Curitiba, Karol is Brazil’s freshest new sound.

Bemba Trio emerged from the fabled Bahian Sound System. I love this group, they epitomise the Bahian sound for me and also make use of the local language, even referencing classic Bahian dishes such as Acaraje and Vatapa. My main man in Salvador, DJ Gregory, dug this beauty up.

Greg Casseus, of Brazilian Beats Brooklyn fame, put me onto this classic samba track by Som Sete. It’s catchy as hell, showing their talent for building the samba sound from the ground up and working the groove.

Cláudia is a Brazilian singer originally discovered by DJ Nuts, a true Brazilian master and champion of his country’s musical heritage. ‘Deixa Eu Dizer’ is taken from her 1973 album on Odeon of the same name. Incredible voice and lasting legacy. Marcelo D2 used this as a sample for the stunning ‘Desabafo’.

Djavan is a singer and songwriter whose career spans four decades. His defining style is a combination of popular Brazilian rhythms and popular music from America, Europe and Africa, and his compositions have been recorded by the likes of Al Jarreau and many Brazilian artists including Gal Costa. His 1988 single for Epic records featured Stevie Wonder and he was sampled by Dubben back in the days on the GAMM label. ‘Nereci’ is a sweet, soulful tune with lovely summer vibes that features Marizinha on guest vocals.

As we represent Jorge Ben’s publishing in Europe we were asked by Junip to clear this cover. I think this is a masterful, new and complete take on the Jorge Ben songbook featuring the luscious vocals of Jose Gonzalez.

Odair was another discovery by Greg and Sean who did the Brazilian Beats Brooklyn compilation, and who have rocked this cut all over NYC. Odair released two albums alongside his own Grupo Capote in 1975 and 1976. This track is taken from the latter, A Forronática E O Forramba. Odair and his grupo also played with Tom Ze and were notorious for mixing traditional North Eastern rhythms, such as forro, with electronic instruments and rock. Their lyrics were also full of humour. I love the deceptive intro on this, leading straight into forro funky accordions.

SamJazz were a local band out of Curitiba Parana. They released a very obscure self-titled album for a local plastic manufacturer, SIR, in 1979 from which ‘Nega Neguinha’ is taken. The Sao Paulo Samba Rock DJs picked up on it and it became a classic.

Originally released by Odeon in 1972, I first found a copy of this Abilio Manoel 7” at the greatest samba rock store in the world, Tony’s Hits in Sao Paulo. This was the same place where I got the legendary Juca Chaves track ‘Take Me Back to Piaui’.

With one eye on the World Cup, Junior comes with this medley Maracana tribute. ‘Hindo Do Flamengo’ was also sampled on the huge baile classic hit ‘Furação 2000’.

Coaty de Oliveira deliver some lovely Brazilian disco-inspired fusion on Camhinho Livre. Even more incredible is that the amazing album this is taken from, La Fête Brésilienne, was a promotional release for the restaurant of a French hotel issued on a label named Maison Conseil. The label had another release, La Fête Nouvelle Orléans, themed on New Orleans music and featuring food and cocktail recipes on the back. Why do people no longer make such albums ?

Arnaud Rodrigues was a comedian, singer, actor, composer and writer who left behind an extensive body of work across television, cinema and music. Originally released in 1970 on Copacabana, ‘Turma Do Po’ was the opening track of his debut album, Sound & Pyla. And what a seriously funky opening statement. Rodrigues also released a wonderful Brazilian cover of ‘Rappers Delight’ titled ‘Melo do Tagarela’.

Bananaticoco by Brazil Selection is another Brazilian oddity, as crazy and funky as the name implies. Released by French label Disque Colibri in the 1970s, notes claim that the album contained a selection of the best samba, rhythms and batucada from Brazil as selected by Marcel Isy-Schwartz. Bananaticoco was in turn sampled by Max B for his disco hit of the same name, and released in Brazil in 1973 on the Opalo label.

Zapatta takes us to the gospel bridge with this mental chant-psych blaster.

The Jorge Autouri Trio championed a hard-edged bossa sound, exemplified on this track taken from their 1968 album Jorge Autouri Trio vol. 2 for the Rozenblit label. Little is known about the band but the music, as always, speaks for itself.

This was given to me by the great Vinyl Vibes store in Germany. Released in 1968 on 7” it’s a prime cut of samba and yet another undiscovered track from the vaults of the Rozenblit label. Based in Pernambuco, Rozenblit were the first vinyl pressing plant in the area as well as one of the most modern plant in the entire country. They soon developed into a label, recording studio and artwork and printing facility. The Rozenblit story is as fascinating as the music they released : between the mid 1950s and late 1960s, Rozenblit released more music from the traditional North Eastern repertoire than any other, their studio could record an full symphonic orchestra and their artwork department was renowned as one of the best in Brazil.

Quarteto Novo hailed from Sao Paulo. Founded in the mid 1960s, the band was originally a trio and became a quartet with the addition of flutist Hermeto Pascoal. ‘Misturada’ is taken from their self-titled first, and only, album. Despite this they made a lasting mark on the country’s musical landscape and many of the members have gone on to have successful solo careers. Their sound was associated with North Eastern Brazil, based on baião and mixed with jazz improvisations.

A lot of bossa was recorded at the legendary Rozenblit studio in Pernambuco, including this cut by Wan Trio, who we know nothing about. Their personal story may be lost to time but the music lives on, not least thanks to some seriously infectious piano melodies.

Manoel dos Reis Machado, commonly known as Mestre Bimba, hailed from Salvador, Bahia, where he was one of the main mestre (a master practitioner) of the Afro Brazilian martial art of capoeira. Corrido is a type of song used in capoeira while togues are rhythms played on the berimbau, a single-string percussion instrument, during capoeira ‘games’. Bimba was the creator of the Capoeira Regional style, among many other lasting achievements he left behind.

Jackson Conti is the meeting of two distinctive and powerful musical minds : Otis Jackson Jr. aka Madlib, producer extraordinaire, and Ivan Conti aka Mamao, drummer for Azymuth. The project was born out of repeated trips by Madlib and the Mochilla crew to Brazil in the early 00s and resulted in an album in 2008. Madlib donated an unreleased fusion groove for the compilation, with Conti on drums.